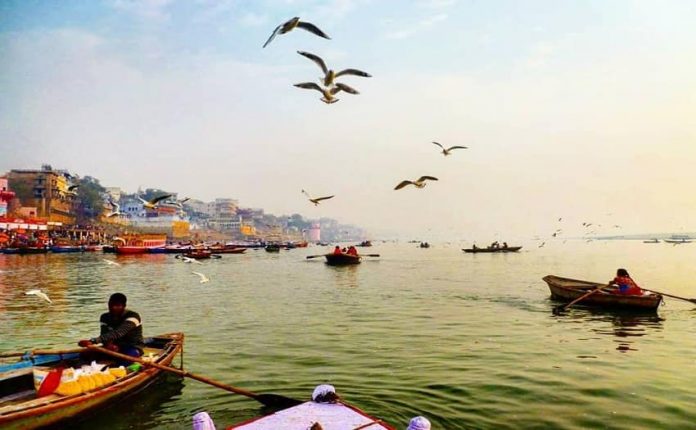 Kashi, also known as the land of Gods and the center of Hindu pilgrimage is one of the world’s oldest city. The city is being known by different names like Varanasi, Banaras, etc. A journey to Kashi is an unquestionable requirement for a Hindu devout at least once in their entire lifetime. Several Yatras or Parikramas take place on the holy soil of Kashi throughout the year. People visit Kashi with a hope to attain proper salvation and before visiting Kashi you must be aware of some of the familiar terms including Gaya Shardham, AkshayaVada, Manikarnika Ghats, Vishnu Paad, and there are many more. This revered place is flooded with thousands of devotees every day who are indulged in performing various activities. Kashi is reckoned as a spot adored to perform Pitru Karya or the ceremonies related to departed souls. However, the rituals are performed at every river banks but it is a strong belief among Hindu devout that if they perform the cremation ceremony of their ancestors at Kashi, then the Kartru (who is performing the rituals) and his family get the Punya. All the rituals are performed at the banks of River Ganga. The article gives you the entire Kashi Yatra details including places to visit in Varanasi, Varanasi temples and many more.

-There is a strong belief among Hindus that Kashi Yatra represents the final journey of their life and so Hindus plan their Kashi Yatra when they get old as they feel that their life is going to get over and they are very close to death.

– There are many people who come to Kashi for seeking the salvation for the sins they have committed in their entire life as Hindus believe that visiting Kashi is the last way to attain salvation amongst any other Indian pilgrimage.

– Besides salvation, Kashi is known for liberation from the cycles of birth and death.

Despite being a spiritual center, Kashi is also known for its historical inclination like Ramnagar Fort and shopping is also one of the most performed activities in Kashi.

Famous things to do in Kashi: this ancient and holy city of Uttar Pradesh offers many things to explore including Evening Arti ceremony, Kashi Vishwanath Temple, Ganga River, Morning boat ride in the divine Ganga River and many more. 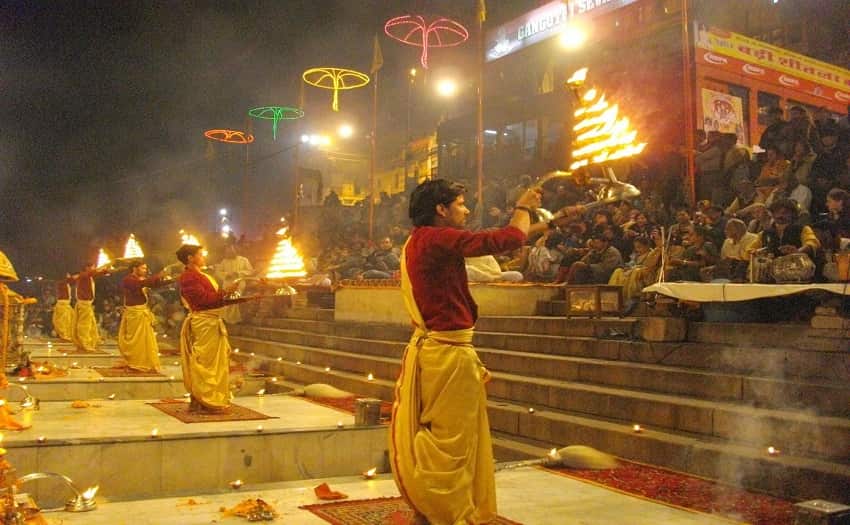 Witnessing evening Arti accompanied by many beautiful rituals at the ghat gives you an everlasting experience of your life. Massive brass lamps are used in the Arti which makes the atmosphere beautifully lit up and the chanting prayers of River Ganga adds more glory. You can get to see the placing of five elevated planks kept at the corners of the stairs. If you are a photogenic people then you must visit the Ghats during evening time as the ambiance looks stunning and beautifully lit up. As brass lamps made the aura beautifully lit up similarly the incense sticks fill the atmosphere with different aromas. 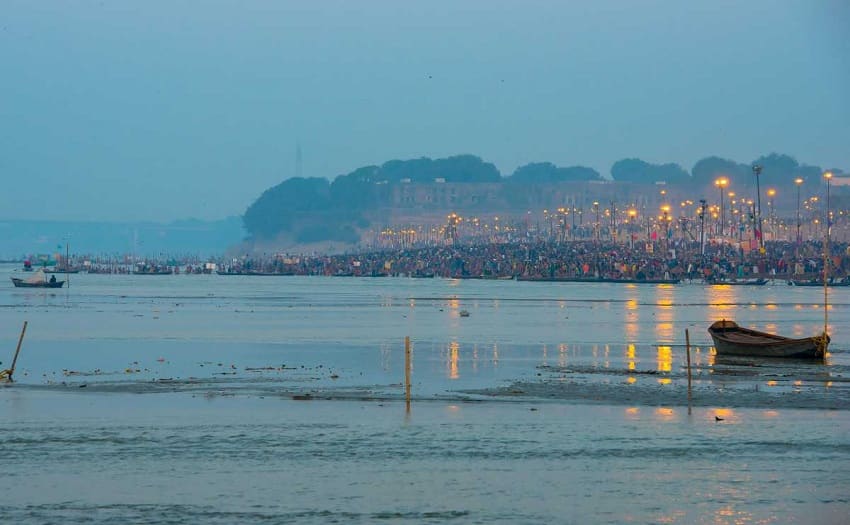 It means taking bath in the holy Ganga River at Triveni Sangam Ghat which is the confluence point of three Indian holy rivers Ganga, Yamuna, and Saraswati which ensures Moksha to the pilgrims. It is believed that Ganga Snaan helps to attain salvation from sins and liberation. However, the river has been polluted and is very unclean now but still, the charm of Ganga Snaan is not getting declined. The water of the river has been lasting for the last hundred years without getting spoiled. There is a proper arrangement of rope and poles to keep you safe from getting drowned and have a safe bath as the water comes with an exertive force which can take the lives. 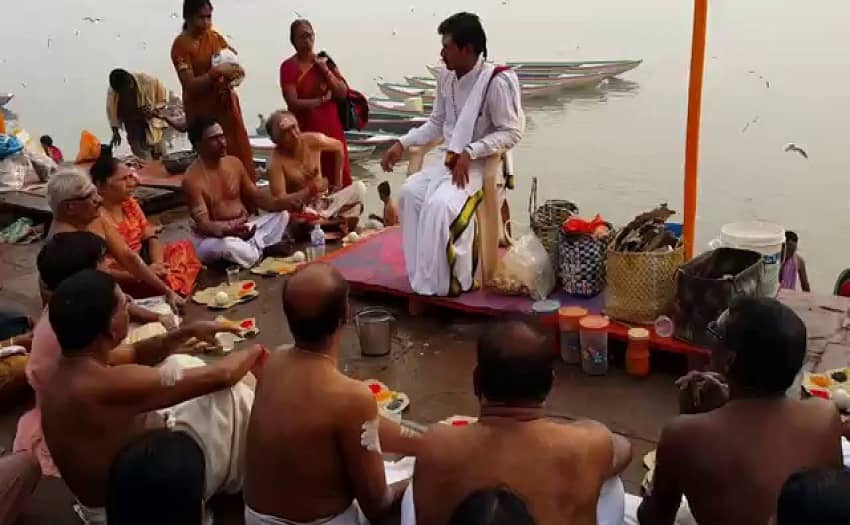 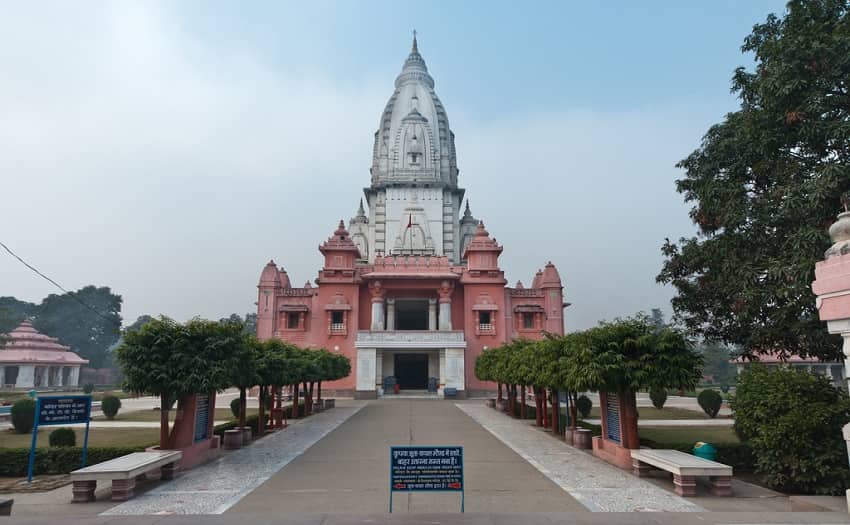 The most important pilgrimage of Kashi Yatra is Vishwanath Temple which is dedicated to Lord Visweswara. It is believed to be one of the twelve Jyotirlingas of Lord Shiva and is considered as one of the holiest places of Hindus. The temple had been plundered several times by Mohammad Ghori, Aurangzeb, Warren Hastings but had been renovated all the time. The present temple was built by Rani Ahilyabai Dokar in 1776 AD. Millions of devotees flock at this revered temple with unflinching faith in Lord Shiva and to see the beautiful temple towers. 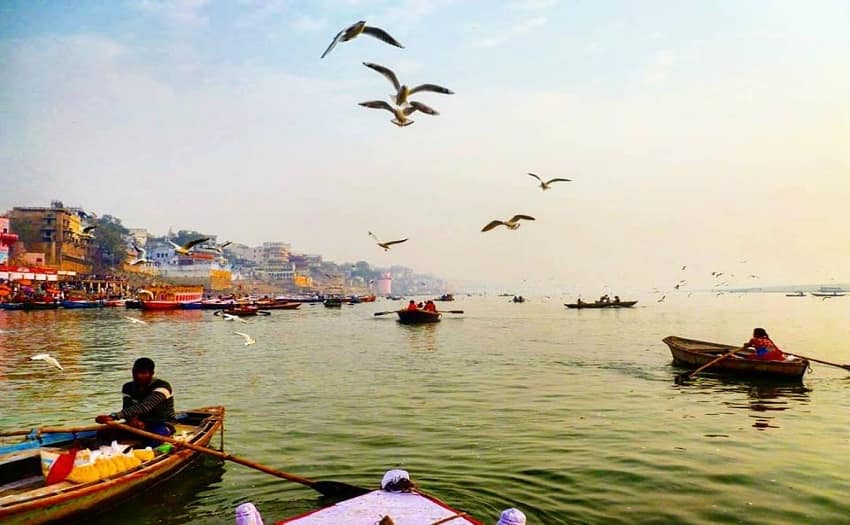 one of the best experiences to gain in Varanasi is to enjoy the boat ride at dawn. Witnessing Varanasi temples along with the Ganges rides give the pilgrims a stupendous experience. The boat ride takes you through different Ghats and the ancient palaces which are located very close to the Ganges. You can see many Sadhus and devotees bathing into the river and this splendid boat ride will unfold the religious significance of the city and even answers properly that why Ganga is considered so sacred among Hindus. The boat ride generally commences from Dasaswamedha Ghat and continues till Harishchandra Ghat and then come back. The boats can be accessed from the Manmandir Area.