Temples abound in the state of Gujarat and many of the temples of Gujarat belong to the divine female energy or Goddess Shakti who protects and nurtures the universe through her chivalry, affection, and intense energy that could create as well as destroy. Many of the Mata Temples in Gujarat are quite ancient and exhibit the architectural beauty of the bygone eras. Availing the Holiday Packages for Gujarat will open up a new horizon for all temple enthusiasts and devotees.

Here are some of the top Mata temples in Gujarat. Read on to learn more: 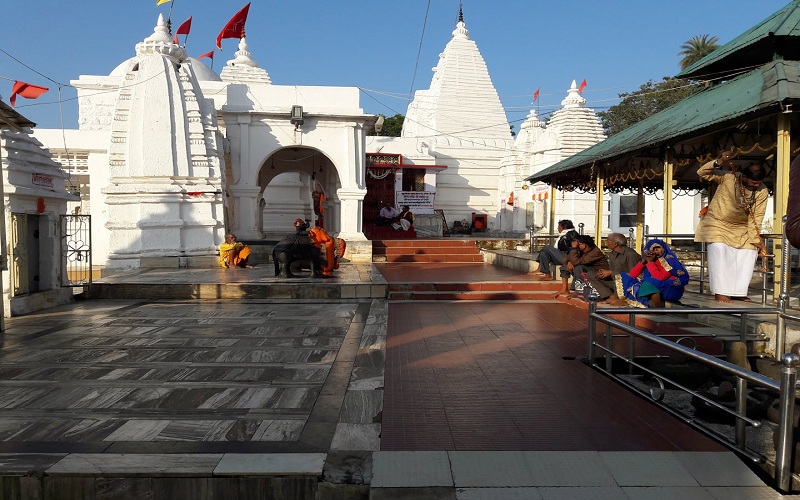 This temple is situated in Gujarat’s Bharuch city in the Dandiya Bazaar. This temple belongs to Goddess Narmada and dates back nearly 150 years. Goddess Narmada is the goddess of dream fulfillment and is believed to make the dreams of her devotees come true. The lake on the temple’s rear side is often regarded as River Narmada’s original source. 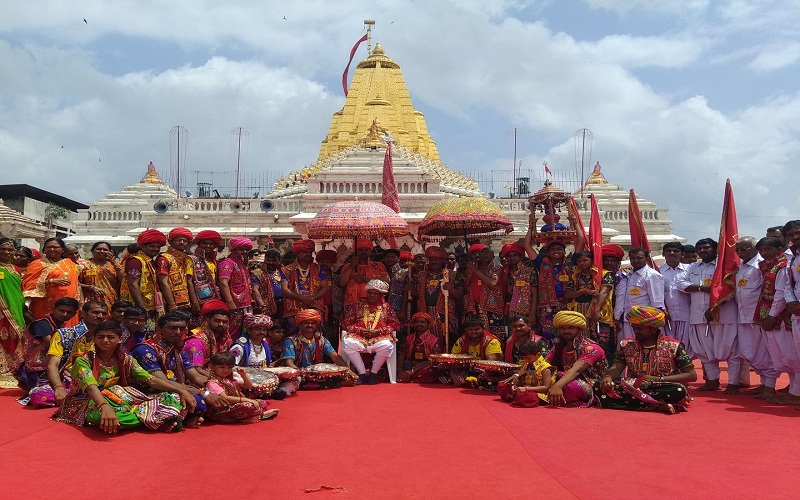 The Ambaji Temple is located in Ambaji town in North Gujarat’s Banaskantha district. The temple is revered as Shaktipeeth belonging to Goddess Ambe; a manifestation of Ma Durga. This temple came into being in the 14th century under the initiative of King Arun Sen of the Vallabhi dynasty. The temple enshrines a Vishwa Yantra with the word ‘Sree’ inscribed on it. That actually symbolizes the goddess. 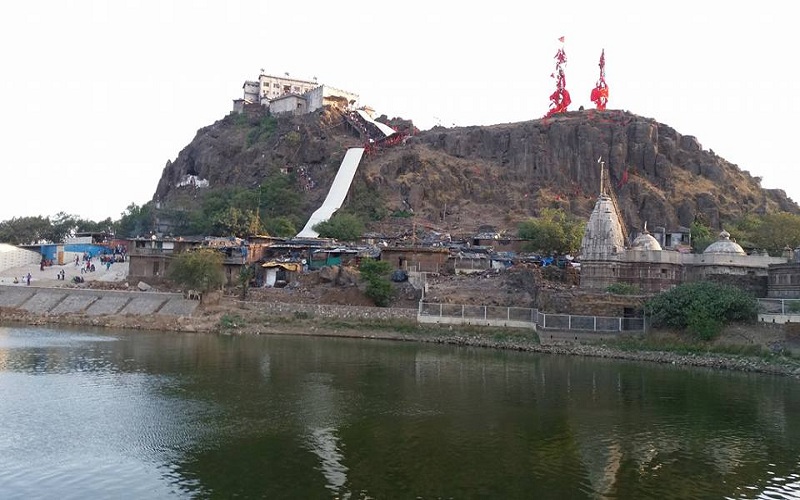 Mahakali Mandir atop Pavagadh hill in Gujarat’s Panchmahal district belongs to Goddess Mahakali, the black Goddess. According to legends, Goddess Mahakali assumed the shape of a beautiful woman and participated in the Navaratri Garba. While she was dancing Jaisinh, the last of Patai’s ogled her with filthy intentions. This angered the goddess and she cursed Jaisinh saying that his kingdom will decline soon and it did. 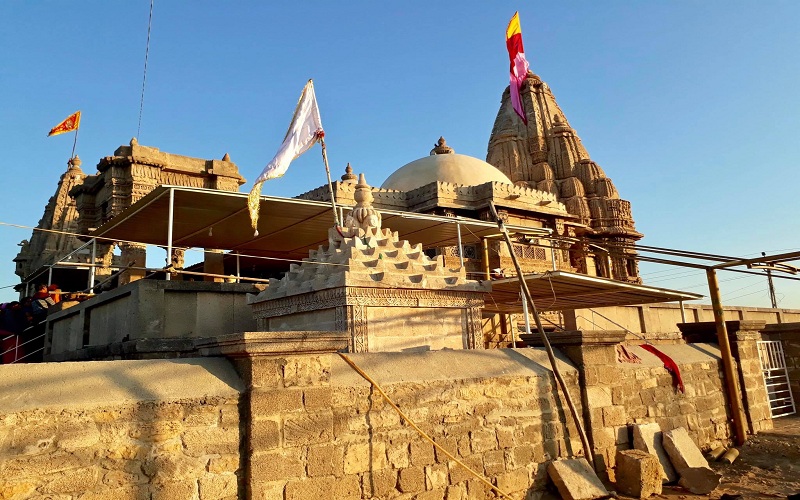 Rukmini Temple belongs to Devi Rukmini; Lord Krishna first and chief wife. She too is an epitome of the ‘Shakti’. The temple is located at a distance of 2kms from the Dwarakadheesh temple of Dwaraka. The temple stands on a pool of water thickly flocked by various types of birds. The temple enshrines a beautiful Rukmini Devi idol facing the west. Here Rukmini is looked upon as ‘Mahalaxmi’. 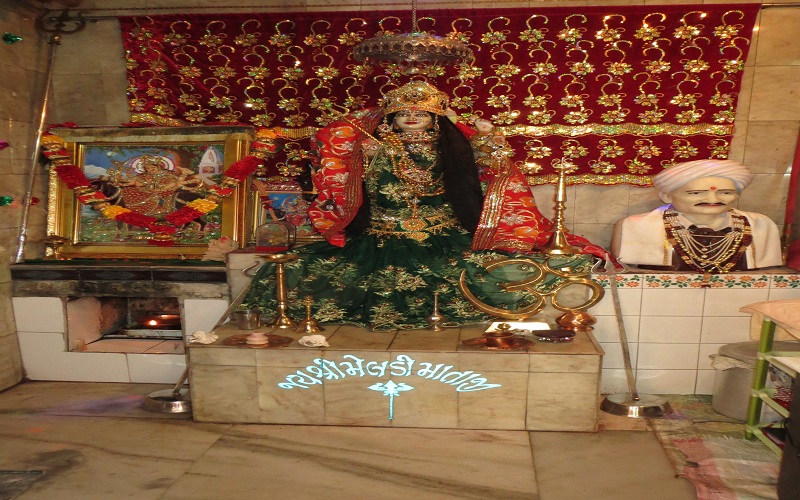 Meldi Mata Mandir in Surat is a Shakti temple belonging to Meldi Mata; a manifestation of Ma Parvati who is always protecting her devotees from the attacks of evil. Devotees pay their tribute to Meldi Mata for getting salvation, a respite from diseases, wealth, knowledge, and success in big purchases. The temple is located in the city of Kheda in Gujarat. 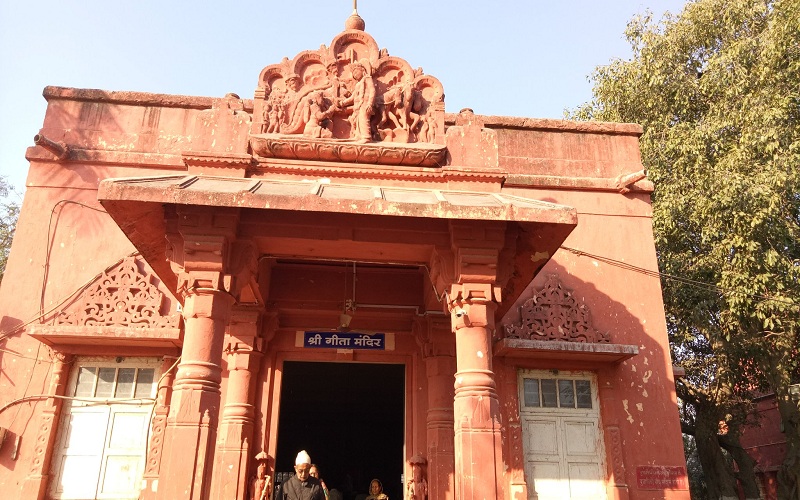 Gita Mandir is located in close proximity to Somnath mandir on the Triveni Sangam Ghat. This temple was set up by the Birlas around the 70s. The temple belongs to Lord Krishna. Constructed out of white marble, the walls of the temple are inscribed with hymns and shlokas from Gita. Inside the temple, you can hear the echo of your own voice. 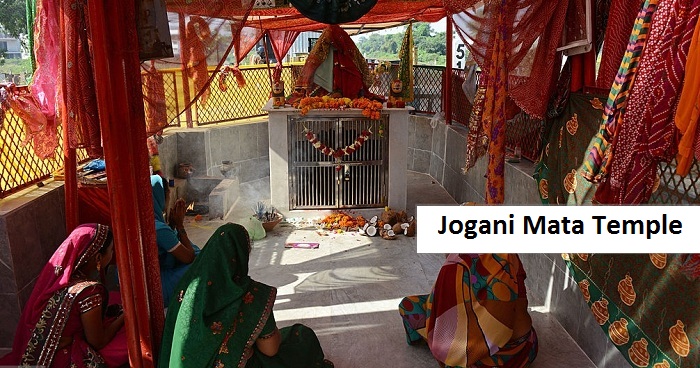 Jogani Mata temple is another revered Mata temple in Gujarat’s Ahmadabad city. The temple deity Yogini Mata is the assistant of the fierce warrior goddess Chamunda. People visit the temple in large numbers to pray to Mata Yogini.

Chaval Mata Mandir in Gujarat’s Varsamedi is another Mata Mandir that has as its deity; the benevolent Chaval Mata. Devotees flock in large numbers at the temple to seek the blessings of Chaval Mata who never allows anyone to go hungry and stay hungry. 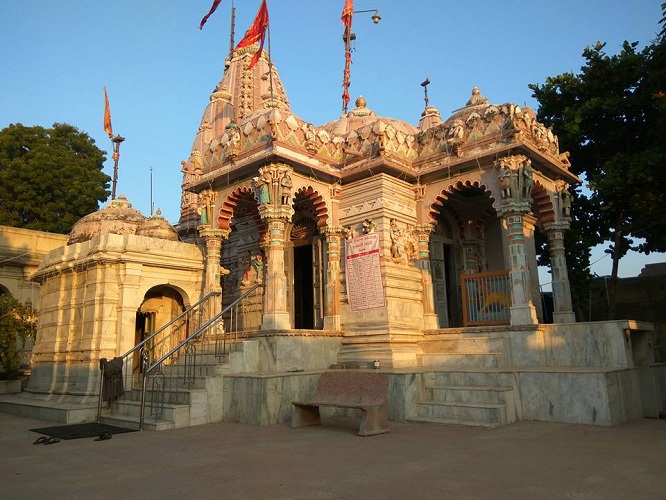 Himja Mata Mandir is located in vicinity to Vadodara city of Gujarat, in Darji bazaar; Halol. The deity of the temple is Goddess Himja; i.e. daughter of the Himalayas and that is none other than Devi Parvati. The region around the temple is more or less arid but there’s no dearth of water within the temple premises and that’s of course a miracle that could be made possible by the grace of the goddess.

The Shri Durga Mandir in Gujarat’s Valsad is dedicated to Goddess Durga or Parvati; the consort of Lord Shiva. Ma Durga the benevolent Mother Goddess is worshipped most pompously here and devotees pour in each day in large numbers to pay their homage to this Mahisasurmardini goddess.

See Also:- All You Need to Know About Chardham Yatra 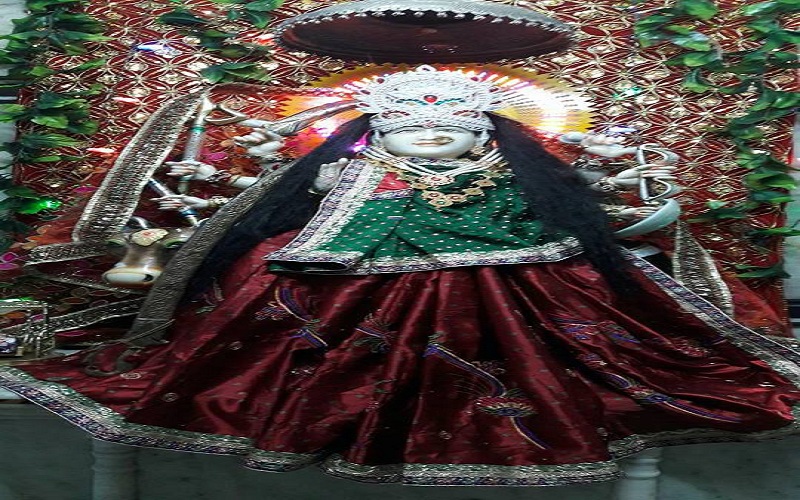 Varahi Mata Temple in Gujarat’s Jetalvasana in Mehsana is a Shakti temple where deity; Goddess Varahi symbolizes the female version of Vishnu’s Varaha avatar. Hence, Varahi is none other than Goddess Mahalaxmi to whom thousands of devotees pay visits each day for peace and prosperity in life.

The beautiful temple of Hinglaj Mata falls within the village of Hinglajpura in the vicinity of Gujarat’s Mehsana district. A hoard of myths and tales is associated with this temple that’s believed to be quite ancient in terms of its age. The deity is goddess Hinglaj, a manifestation of Mata Shakti. After Sati’s self-immolation when Lord Shiva started his Tandava with Sati’s corpse upon his shoulders, Lord Vishnu intervened by sending his Sudarshan Chakra to disintegrate Sati’s body. The place where her head fell, received a Shaktipeeth by the name Hinlajmata peeth. 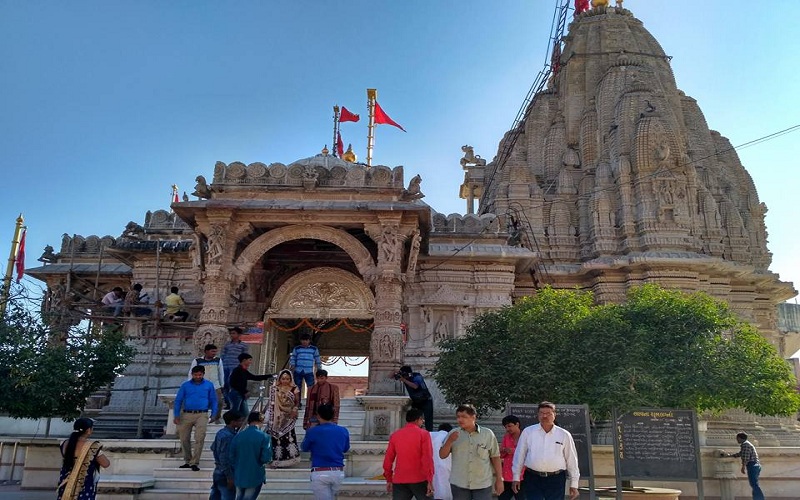 Umiya Mata is the presiding deity of KadvaPatidar community. The deity is a collective manifestation of Goddess Kali, Laxmi as well as Saraswati. The temple according to myths had been constructed by Lord Shiva himself. The deity here is regarded as one who offers strength to her devotees. 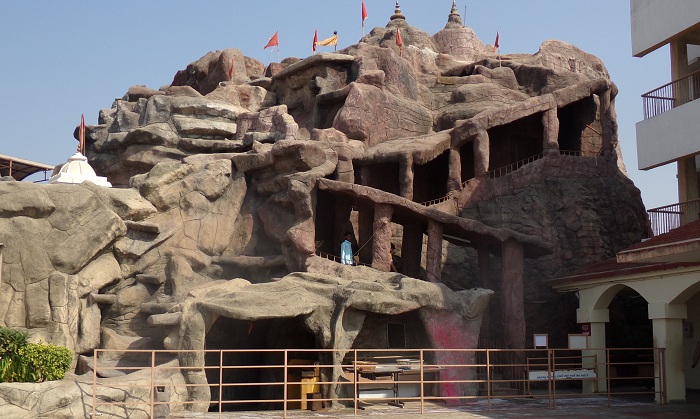 The Vaishnodevi temple stands on the highway running between Sarkhej and Gandhinagar. The temple resembles the cave shrine of Jammu and Kashmir in every way. In just a few hours you could complete the temple darshan. Huge crowds of devotees turn up at the temple each year. 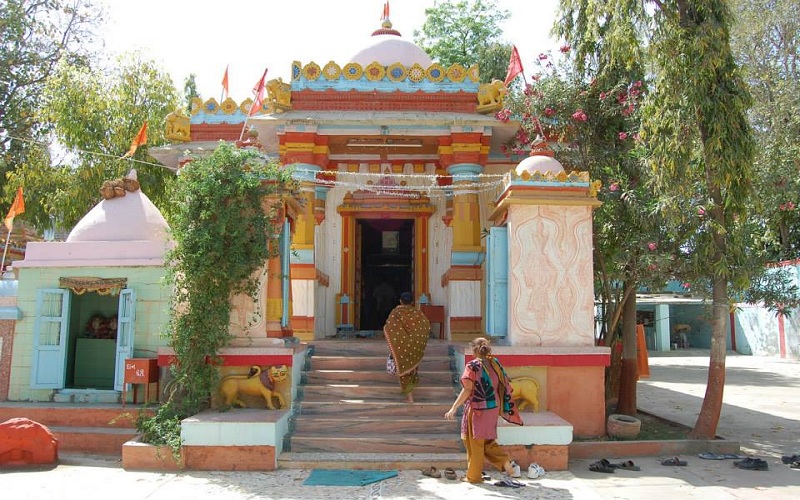 This temple falls on the way to the White Rann and is located at a distance of 14kms from the city of Bhuj. The temple stands on the river banks of the Khari River and belongs to Rudramata; the chief deity of the Jadeja clan. As per myths, the temple dates back to nearly 400 years in age. The Garha Safari Lodge is the key attraction in the vicinity of the temple. 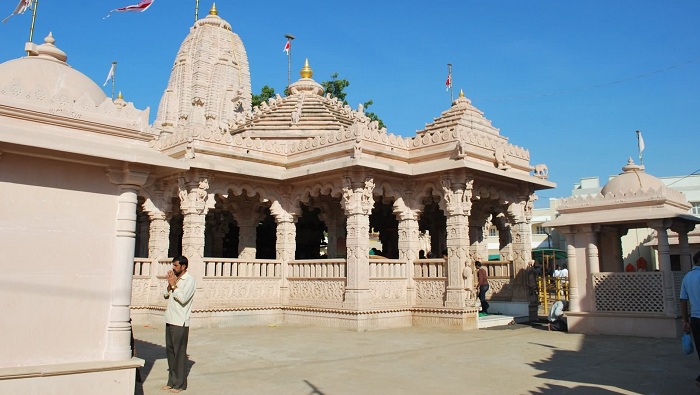 Mata No Madh is a serene spiritual destination belonging to Maa Ashapura. The deity of the shrine is often regarded as ‘Desh Devi’ which means ‘Common man’s Goddess’. This ancient shrine is located at a distance of about 138kms from Bhuj city of Gujarat. Many communities in Gujarat worship Goddess Ashapura as their revered Kuldevi. The Jadeja Rajput clan especially believes the goddess to be their community’s presiding deity. Mata Ashapura is said to fulfill all wishes of her devotees. An annual fair is held around the temple during the times of Navratri and huge crowds gather around the temple to indulge in the spirit of carnival. 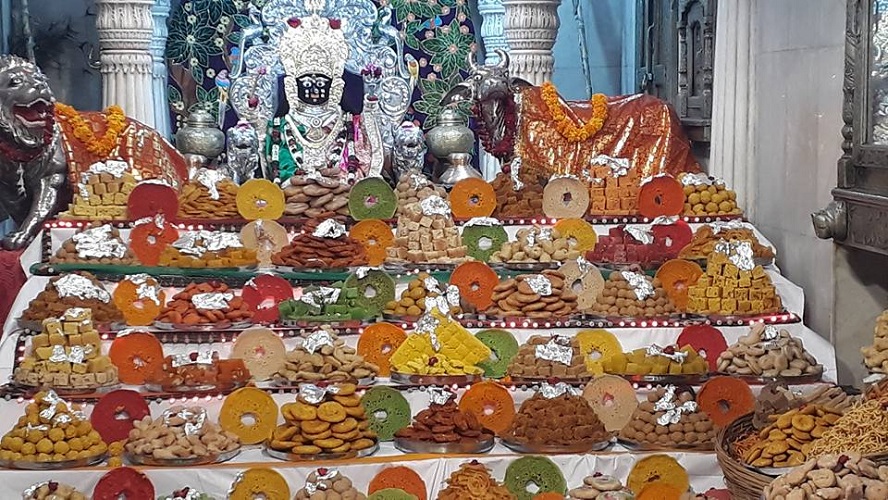 Bhadrakali Temple housed inside Ahmadabad’s Bhadra Fort was constructed during the medieval period under the initiative of the Marathas. The temple has Goddess Bhadrakali as its deity. The goddess is believed to load one with wealth and riches when asked for it sincerely by a devotee. During the festivities of Navratri, Bhadrakali mandir wakes up to pomp and glory and large crowds of devotees gather at the temple for the occasion.

Ma Chamunda is the very angry, frenzied, and fierce form of Adda Shakti. Devi Chamunda is said to have destroyed Chanda and Munda; the two demons thereby saving the universe from their plunder and devastation. The Chamundi Devi temple of Ahmadabad belongs to that fierce form of Ma Shakti.

This goddess temple in Ahmadabad city in the state of Gujarat is dedicated to Ma Meenakshi who is but a manifestation of the goddess Parvathi. Meenakshi is Lord Shiva’s beloved consort and is worshipped in the temple along with the image of Lord Shiva; her husband.

The Chamunda Mandir is located in Ahmadabad’s Shantinagar locality in the state of Gujarat. The temple belongs to Goddess Chamunda; a fierce form of Goddess Shakti who had assumed that fierce aspect to destroy demons, Chanda and Munda. The Mata here is much revered by the locals.