The state of Bihar in ancient ages was the seat of power, prime learning center, hub of prosperity and one of the most religious destinations in India. Majestic empires like Magadh, had once made Bihar one of the most powerful and significant places in India. Since a long time, Bihar has remained underrated by tourists, but little do people know that this ancient focal point of knowledge and spirituality is home to some of the most remarkable and awe-inspiring tourist and spiritual destinations in India. Buddhist Pilgrimage Tour is increasingly becoming one of the most sought after tour packages in the world. Bihar is historically affluent and houses some of the most opulent Buddhist centres in the world attracting Buddhist pilgrims from across the globe. With numerous stupas, monasteries and temples dedicated to Lord Buddha Bihar is a hub for Buddhists. Through the course of time these Buddhist pilgrimage centres are developed, renovated and maintained for devotees. Presently one can still witness the glory, magnificence and rich knowledge it once stood for. Visit Bihar if you want to have an insight into the life and times of Lord Buddha as well as become aware about the long tumultuous history.

Here are some of the 05 most famous Buddhist destinations in Bihar:

Being one of the oldest universities in the world Nalanda is a must visit site for visitors who want to reminisce the ancient times. This magnificent Buddhist monastery holds immense religious significance due to the fact that the famous Jain Tirthankara, Mahavira had spent time here. It is also said that Lord Buddha spent a large number of time here giving teachings to the students there on the importance of Buddhism. Even the famous Chinese travelers Hiuen Tsang stayed here for 2 whole years to witness the glory of this place. Nalanda was a prime centre of education for students from various locations like Korea, Japan, Thailand, and China among other Central Asian countries who were taught formalized Vedic teachings along with Buddhism. Currently, although some parts of the place are still in ruins, people still offer their prayers and offerings to the Lord right on top of these ruins.

Home to the famous and pious Mahabodhi temple Bodh Gaya is an extremely religious pilgrimage site for Buddhists. This is also the place where Lord Buddha is said to have achieved the answers to his lifelong questions or also known as enlightenment. Being a part of the four main and significant pilgrimage sites (other three Buddhist pilgrimage sites being Kushinagar, Lumbini, and Sarnath) for Buddhists one can also visit the Bodhi tree where under which Lord Buddha had attained his enlightenment. Located on the banks of River Niranjana, King Ashoka was the very first individual who had built a temple here. Lord Buddha’s disciples have been visiting this place and meditating in the temples here to gain some insight into the life and times of Buddha. Apart from the Mahabodhi temple, Bodhgaya is also home to several other holy Buddhist temples built by believers from Sikkim, Sri Lanka, Tibet, Bhutan, China, and Japan among others. This enchanting town promises you a journey back in time.

Vaishali is a famed tourist destination for people two of the most highly revered religions in India and the world, Buddhism, and Jainism. This small village has a lot to offer in terms of spiritual destinations which include stupas and temples which are dedicated to Lord Buddha. This place is kept on a pedestal because Lord Buddha had announced his Mahaparinirvana at this very location and is mentioned as one of the eight of the greatest events that took place in his life term. This city also served as home to the ‘enlightened one’ for 5 years post his enlightenment. Apart from these commonly acknowledged reasons another reason for its immense significance is the fact that for the very first time in the history of Buddhism, women were included into the Sangha. It is also the location for the magnificent and age old Ashokan Pillar which was constructed by Ashoka as his way of showing his acceptance towards Buddhism. Visit here and engulf yourself in pure and unadulterated spirituality.

Rajgir has always been the centre of attraction for Buddhist pilgrims and devotees since a long time. This town is an important part of the Buddhist pilgrimage because Lord Buddha had spent 12 years of his life here where he preached two sermons as well. He also held the very first sermon post his enlightenment at the site of Gadhrakuta or vulture peak. It is also home to Buddha’s favorite retreat spot of Jivkamaravana Monastery, which is nestled amidst the lush green, thick forest. Apart from the beautiful and calming monasteries Rajgir also consists of a cave where Lord Buddha is said to have stayed after giving his speech on the Vulture hill to his disciples. Along with being of huge relevance to the Buddhists Rajgir is also extremely important for Jain devotees making this town completely drenched in pure spirituality. Even if you are not spiritually inclined you must definitely pay Rajgir a visit since it is considered as a hidden gem with a vibe of serenity and calmness in the environment.

Known as Pataliputra during the time of Lord Buddha, this town is of huge importance to the Buddhists since it is believed that Patna is the base from where Buddha’s trail of footprints to enlightenment begins. If you are on a journey across exploring the Buddhist destinations in India then you will definitely be guided to one of the oldest capital cities of Patna. Lord Buddha had passed through this city numerous times including the final time before heading to the location of his Mahaparinirvana, Kushinagar. There is a memorial park dedicated solely to Lord Buddha called ‘Buddha Smriti Park’, which houses a museum dedicated to the life and times of Lord Buddha as well as the holy relics from Thailand, South Korea, Myanmar, Tibet and Japan, Karuna stupa, a fully equipped meditation centre complete with lush green gardens. Visitors also witness a laser show amidst the park which is lined with bodhi trees commemorating Lord Buddha. 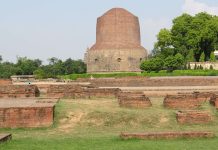 Parmeshwar Dass - March 16, 2020
1
The spring month in almost all of India, March signifies the end of the winter and Welcome of the spring. We Indians welcome this...